Neglected by Assessment: Industry versus Inferiority in the Competition for Scarce Kidney 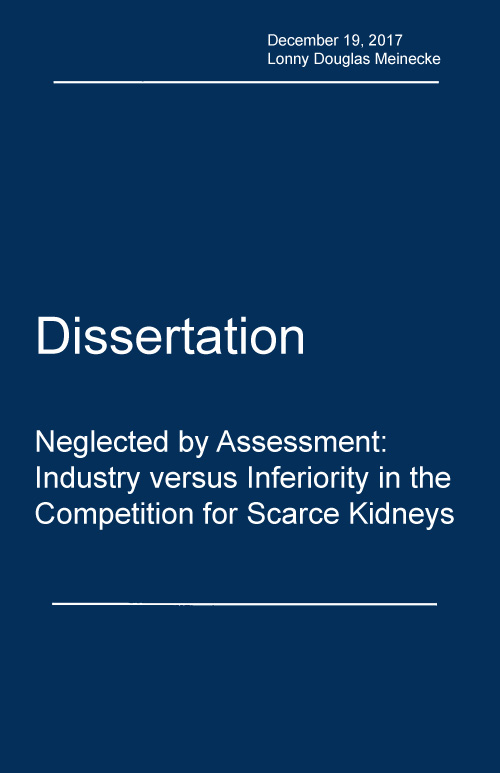 All individuals with end stage renal disease (ESRD) will perish from the disease unless they receive a donor kidney in time. The purpose of this research was to compare groups of candidates on the kidney transplant waiting list in the U.S. Renal Data System, to test whether some groups waited longer to receive a kidney due to a physical or mental assessment bias. A review of the literature suggested that most who perished prematurely also waited the longest and thus perished by neglect, fitting a theoretical framework called the stereotype content model (prejudice based on value to society). A causal-comparative study was conducted to examine the wait times of kidney candidates on the official waiting list categorized as too young or too old (n = 17,914). The results of one-way ANOVA, Welch’s F(2, 494.46) = 113.71, p < .0005, ω2 = 0.13, suggested that the most mentally fit (not physically fit) children had significantly lower wait times (M = 250.02, SD = 296.33) despite not having contributed, whereas seniors had the longest wait times (M = 786.27, SD = 717.51) despite having contributed a lifetime to society. Further analysis revealed that, all else considered, primarily those assessed as mentally capable will be selected to survive ESRD, Welch’s F(3, 819.03) = 53.97, p < .0005, ω2 = 0.08. This study concluded there was an inadvertent irony in candidate assessment criteria. The need to ethically allocate scarce organs has resulted in criteria that favor the survival of human kidneys over human candidates.